Economic and social frailties, de-globalisation, the rise of the renminbi: these were but three of the topics under the spotlight at BNP Paribas’ Global Markets Americas Conference 2020, which took place in virtual format at the beginning of June.

With Covid-19 disrupting and dislocating every facet of life, the world is being forced to react and adapt at great speed. But is it reacting the right way? And is it doing so fast enough?

BNP Paribas brought together senior investment professionals, corporate leaders, policy experts and economists to take part in a series of online discussions, exploring the key macroeconomic and geopolitical transformations, the choices ahead, and what these mean for the world as it emerges from the pandemic. In one discussion focusing on the future geopolitical landscape, economists and data scientists from leading financial institutions like Neuberger Berman, Point 72 and BNP Paribas joined America’s leading minds from research institutions like Harvard University and MIT. [1]

The Covid-19 pandemic has led to high Covid-19 death tolls in different countries. This, according to economists at the Conference, has shed light on two weaknesses: first, it has exposed economic and social frailties; second, it has brought to the fore the importance of independent, autonomous expertise in political decision-making, which has been a critical component of the response to the virus in various countries. Inadequate responses to the need for accelerating testing, building systems for contact tracing and strengthening intensive care unit (ICU) capacity may be evidence of this. In response, major structural reforms are necessary. The economists argued for the need for greater technocratic expertise in policymaking within a more robust framework of democratic accountability, which should build greater resilience to future crises.

Beyond policy implementation, the deepening trend of de-globalisation could be hugely destabilising for a number of markets and which may prolong a global recession, according to some panellists. Another outcome from Covid-19 could be the rise of the Chinese RMB as a rival to the US Dollar as the global reserve currency, which could happen sooner than previously thought. While the pre-Covid-19 consensus pointed to supremacy timeframe within 75 years, one academic now thought it would happen in the next 20 years, driven not just by the impact of the pandemic and ongoing trade wars, but also by Chinese advances in digital currencies.

The crisis has also highlighted the significant gulf between large, cash-heavy corporates and SMEs, a number of whom operate on tight margins, said one expert. Although government intervention to support SMEs is well intentioned, it cannot continue indefinitely and there will be casualties, he added. Simultaneously, as more activities become increasingly digital, technology companies will inevitably be among some of the major beneficiaries. However, the transition towards digitalisation and increased application of artificial intelligence (AI) tools could be disadvantageous for certain workers, he said, adding the provision of retraining for workforces will be essential in the future.

The role of data analytics will be instrumental in mitigating some of the downside risk from the pandemic, as it could enable companies to react faster to abrupt change. Panellists discussed how anonymised credit card transactional data was now being used to analyse the spending behaviour of certain, specific segments of society, giving investors a more forensic insight into a number of macro trends. As data volumes grow and the analytics around it improve, investment firms trading public market equities and private equity firms could obtain a strategic advantage, explained the speaker. 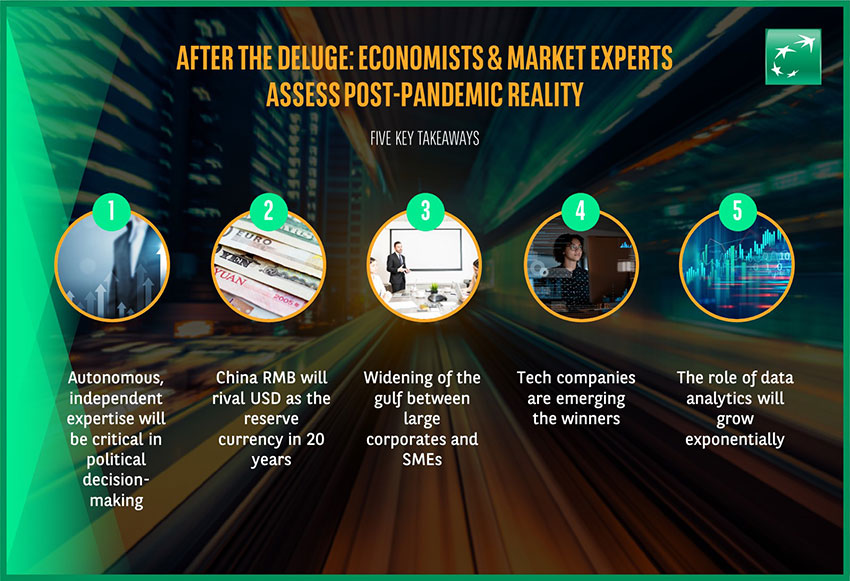 Despite all of this technological disruption, productivity rates have not increased at levels comparable to the introduction of earlier game-changing innovations such as the car. Dr Daniel Ahn, Chief US economist and Head of Markets 360 North America at BNP Paribas, told listeners that hype cycles are synonymous with new technologies, but pointed out that there is frequently a time lag between the invention itself and its impact on wider society.

Automation, Algos and AI: is FX catching up with Silicon Valley?

A radical new approach to strategy and economics to provide you with top quality views, focusing on evidence-based research and thought leadership. We bring economics and strategy together in thematic notes across asset classes, delivering what you need when you need it and continuously adapting to your needs.