Initial margin for non-cleared derivatives: getting ready for the next phase

Since 1st September 2016, initial margin rules for non–cleared derivative transactions have been progressively entering into force. As the rules are phased-in (1st September 2019 was the fourth phase), increasing numbers of market participants are subject to the requirements every year.

Phases 5 (September 2021) and 6 (September 2022) are still ahead and will impact a significant number of firms, including institutional investors.

Exchanging initial margin (IM) on non-cleared derivative trades is now an established practice, at least for the firms that have fallen under the scope of the rules in their early phases (1 to 4).

However, initial margin rules have many specificities, due to the nature of the calculation of the IM amounts, the principle of bilateral exchange of margin (each party posts and receives at the same time) and custodial segregation aspects. The compliance process is complex and can take from 12 to 18 months on average, according to ISDA.

What is the timeline?

The timeline under which firms are impacted depends on their “aggregate average notional amount” (AANA) of non-centrally cleared derivatives (at consolidated group level) falling above a pre-determined regulatory threshold. All instruments (even the physically settled forex forward and forex swap transactions that are exempted from initial margin requirements) count for the purpose of calculating the AANA.

On April 3rd 2020, in the COVID-19 context, the Basel Committee on Banking Supervision (BCBS) and the International Organisation of Securities Commissions (IOSCO) announced new regulatory dates:

Since this announcement, several countries have already amended their local regulations to reflect the BCBS/IOSCO guidelines (CFTC in the US, OSFI in Canada, FINMA in Switzerland, APRA in Australia, JFSA in Japan). The EU should amend the final Regulatory Technical Standards (RTS) in the short-term. 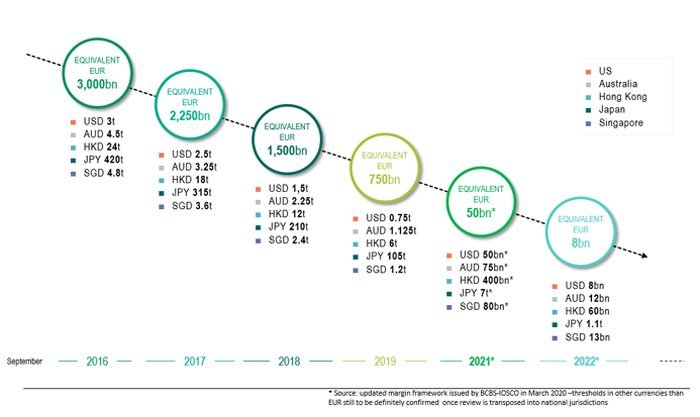 Which counterparties are concerned?

Most financial counterparties trading non-cleared derivatives will be “in-scope” and the exemptions are very limited. As of today the rules have been transposed in many jurisdictions (EU, US, Japan, Australia, Hong Kong, Singapore…) and since September 2019, counterparties with an AANA of non-cleared derivatives above EUR 750 billion (equivalent) are impacted. In many jurisdictions where the rules have been implemented, the treatment of third-country entities implies that most cross-border transactions entered into with entities incorporated in third-country jurisdictions are in-scope.

A study from ISDA and SIFMA in July 2018 estimated that over 1,000 firms fall under the scope of the final phase (AANA threshold set at 8bn EUR).

Which instruments are concerned?

The scope of non-cleared derivative instruments that are subject to the collection of initial margin is generally consistent across the main jurisdictions in Europe, Asia Pacific and the US. Physically settled forex forwards and swaps are excluded across all jurisdictions.  However, some jurisdictions may have specific exemptions, either on a permanent basis (e.g. equity options and forwards are out of scope in the US) or on a temporary basis (e.g. equity options were exempted in the EU only until 4th Jan 2020). 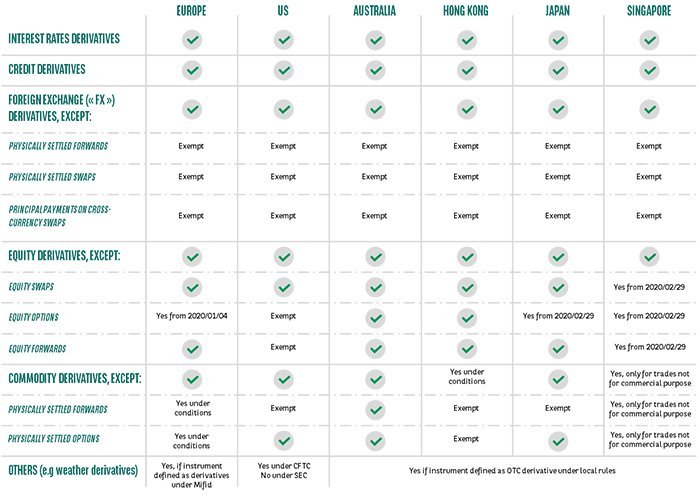 Moving to the implementation phase

The implementation of initial margin rules ramps-up gradually at each new phase. However, phases 5 and 6 will impact a large number of institutions, which will have to comply within the next two years. According to the study from ISDA and SIFMA in July 2018, over 9,000 new collateral relationships would have to be in place. And unlike variation margin, which is a concept well-established for most firms, initial margin is quite new, especially for institutional investors. It involves not only the trading parties, but also custodians because of the collateral segregation aspects.

Initial margin is a risk-based calculation, and as such is very different from variation margin (based on the market values of trades).

As per the rules globally, the calculation of initial margin should rely either on a table-based method, or on an internal model, with a one-tailed 99% confidence interval over a “margin period of risk” (horizon) of at least 10 days.

Regarding the internal model, ISDA has developed a “Standard Initial Margin Model” (SIMM), with a view, among others, to facilitate the implementation of the calculation process by market participants and avoid inextricable disputes on the initial margin numbers. This model has been adopted by a majority of firms in scope because it takes into account the offsetting risks in a derivatives portfolio, and as such is deemed more efficient than the table-based method.

For firms choosing the internal model approach (which the SIMM is considered to be part of), the rules also mandate to implement a “prudential-style” governance with a continuous back-testing process (note that this requirement applies only to Swap Dealers and Major Swap Participants in the US).

The regulations require an insolvency-remote framework with no-reuse for the collateral. As such, the initial margins are transferred in favor of the secured party under a security interest regime, and a specific custody framework has to be implemented to protect the assets in case one of the trading parties goes into default. This framework is based on a dedicated “trilateral” account control agreement (ACA) signed between the parties and a custodian.

The instruction mechanism for pledge and release of collateral can be complex. The vast majority of firms in scope of the early phases have chosen to use triparty agents because of their natural ability to operate those pledge / release movements same-day and simply upon reception of exposure messages (MT527 / RQV message).

Despite the recent timeline change, granting one more year to phases 5 and 6 firms must not be seen as an occasion to postpone the implementation project. In this critical period of extreme market volatility, it is important for phase 5 firms to keep the momentum and maintain their efforts on the undergoing implementation project (when already started).

Firms have different options to comply, such as implementing the rules by their own means, or appointing a service provider who can offer an end-to-end solution from IM calculations, exposure management, triparty agent services and custody segregation. Besides, combining the management of initial and variation margins within the same team brings operational efficiencies such as:

Whatever the option retained, firms will face a learning curve and will need to put in place a robust governance and project management structure. When it comes to the timeline and planning, it is key to factor-in the dependencies across internal departments (front-office, risk, legal, operations and IT) and external providers (service providers and custodians) to avoid a last minute rush to the compliance date.

Article initially published in December 2019 and updated in April 2020

The EU Pilot Regime: Putting blockchain to the test

IBOR, fall-backs and their impact on businesses