The US fiscal and monetary response to Covid-19: next steps

At a virtual Markets360 Unplugged event, industry leaders shared insights into the US macro outlook and how the Federal Reserve might mitigate the crisis.

BNP Paribas is bringing together senior investment professionals, policy experts and economists in Markets360 Unplugged, a series of virtual discussions exploring key themes and trends across different asset classes, the choices ahead, and what these mean for the investment community.

Dr Daniel Ahn, Chief US Economist and Head of Markets360 North America at BNP Paribas, moderated a panel where he was joined by a leading former central banker and a high-profile US fund manager.[1] 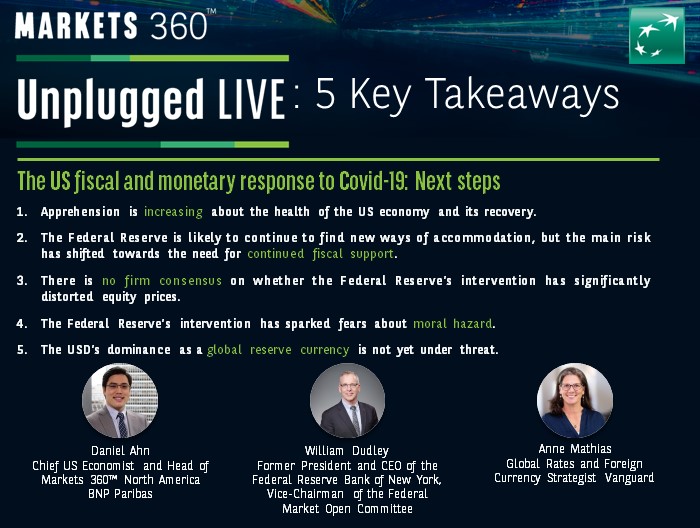 There was growing pessimism among the panellists about the US economic recovery, with experts pointing to the pandemic’s resurgence in parts of the country along with the re-imposition of social distancing measures in badly affected states. One panellist said this had led to a flatlining in the US economy in July, after a steep rebound earlier in May and June. The panel discussion went on to address market sentiment, which was said to be heavily determined by the extent of the Congress’ support to local state municipalities and the continuation and scope of the unemployment insurance scheme, as well as continued accommodation from the Federal Reserve.

One panellist said he did not expect the Federal Reserve to make any major announcements about further asset purchases or the introduction of potential yield curve controls until September. Another noted that that the Fed had had implemented an exhaustive monetary policy and reduced rates to 0% to help ensure liquidity was maintained in the market, so they doubted there would be any further, more drastic measures unless this proved necessary.

Moreover, the panel agreed that the Fed would not contemplate raising interest rates until inflation rises above 2% and unemployment falls below a pre-agreed threshold. So very few people anticipate rates will rise either this year or next. However, there are growing concerns about the Fed’s largesse. “While the Federal Reserve has been very successful in preventing this crisis causing a liquidity crunch as we saw in 2008, there are fears that its intervention risks causing other negative side-effects, including the distortion of asset prices and the enablement of debt monetization,” said Ahn. One panellist said equities were not that overpriced, pointing out a lot of money is still entering into the asset class, while prolonged low interest rates will also make discounted cash flows coming out of equities attractive.

The panel said moral hazard is one potentially serious by-product of the Fed’s perceived support for the corporate and high-yield bond markets. One panellist commented that while the Fed had to intervene to support market function, there are concerns that participants in these markets could be encouraged to take on more risk during the next cycle, especially if they are convinced that the Fed will bail them out if things go badly awry.

At a previous Markets360 virtual session, a panellist had suggested that Covid-19 and the ongoing US-China trade wars could accelerate the renminbi (RMB)’s transition to becoming the global reserve currency of choice, thereby displacing the US dollar (USD). At that event, a leading academic had said that whereas the consensus before Covid-19 had pointed to the RMB challenging the USD’s supremacy within 75-100 years, he now thought it would happen in the next 20-30 years.

One panellist at this subsequent event was skeptical, highlighting the USD’s dominance in global markets. For instance, the panellist said around 90% of all currency trades involve USD in one leg of the transaction; 45% of all global debt is USD-denominated; 62% of reserve managers’ assets are in USD; and all commodities are denominated in USD. Although it is possible reserve managers could increase their euro holdings, the panellist doubted that either the euro or the RMB would supplant the USD any time soon. However, Ahn said that digital currencies could be a potentially disruptive force in the future.

[1] The Markets360 Unplugged session was titled, ‘Assessing the US Fiscal and Monetary Response to Covid-19 and Next Steps.’ The panel was moderated by Dr Daniel Ahn, Chief US Economist and Head of Markets 360TM North America at BNP Paribas. Speakers included William Dudley, Former President and CEO of the Federal Reserve Bank of New York and Vice Chairman of the Federal Open Market Committee; and Anne Mathias, Global Rates and Foreign Currency Strategist at Vanguard.

To learn more about Markets 360 Strategy and Economics from BNP Paribas, click here. BNP Paribas does not consider this content to be “Research” as defined under the MiFID II unbundling rules. If you are subject to inducement and unbundling rules, you should consider making your own assessment as to the characterisation of this content. Legal notice for marketing documents, referencing to whom this communication is directed.

on the topic Economy

Our global Credit business enables us to realise synergies while maintaining strict boundaries between the public and private sides. We provide solutions to clients throughout the entire credit continuum from origination through execution to secondary market trading and post trade services.

Global Macro offers the full spectrum of products across FX, Rates and Commodities in both developed and emerging markets, from millisecond electronic trading supported by the most advanced AI platforms, through to long dated, high touch solutions.

We aim to be a top 3 house across both developed and emerging market rates. Our business has grown substantially and we operate a culture of “shared purpose”. Our focus is aligned around the social and economic outcomes of supporting our broad client base across Corporates and Institutional Investors.